Jack the Beanstalk in Chico? 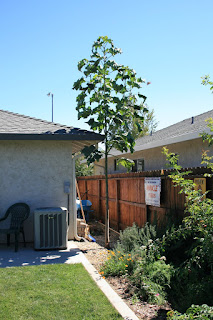 It all began last spring when this random weed sprouted from our gravel covered side yard. At first we all thought it was a hearty sunflower. However after months of growth and no blooms, we realized this was just a weed. I of course thought it was cool. Jake on the other hand like any good farmer was irritated by its presence. It grew to a lengthy 6ft or so before Jake cut it down for good...at least that is what he thought.

Fast forward to the spring of 2008. Its Baaack! Who knows why this weed has chosen our yard but it did. When it returned we had already begun the yard transformation for the hosting of our wedding rehearsal dinner in early July. You would think with the impending gala Jake would immediately remove the pesky weed. However his then soon-to-be-wife (that’s me) became fond of the weed and asked for its life to be spared. After all, it grew with such vigor that maybe it was Jack the Beanstalk?

As the weeks and months passed, the weather became warm and we hosted various back yard gatherings, we made sure to note the presence of the odd weed now turned tree to our many guests. It is interesting to note that we don't even know what kind of weed this is. With Jake being a farmer and myself also working in the industry, we obviously have friends who also partake in a farming career. It was these people who we also asked their opinion on the variety of this hearty vegetation. The verdict was milkweed. I just assumed it was a tree.


July came, we hosted our rehearsal dinner, became husband and wife and the weed now tree remained. A few of our family and friends recall the "bean stalk" and ask if it is still growing strong. It was rising five feet above the gutter of the house, until Monday, Sept 1. You see, Sunday night brought a gusty bought of wind to Chico. The bean stalk did not fall down of course - it now has a sturdy trunk. It did however beat against the gutter of the house all night and interrupted my husband's slumber. I was advised to say my goodbyes to my bean stalk because upon Jake's return home that night from work, he would bring out the chainsaw and cut it down. 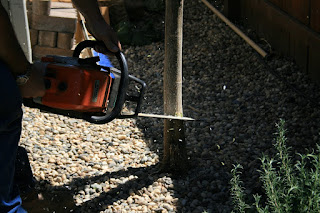 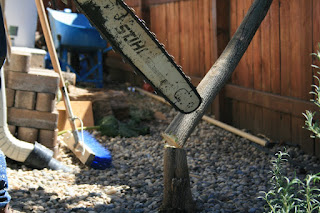 Now he has threatened this before so I kind of thought he was joking. Boy was I wrong. The chainsaw roared before he even opened his beer. And if you know my husband, anything taking place before he opens his beer is pretty serious! Jack the Bean Stalk is now gone. My fairy tale is over…for now. Stay tuned. It might be back in 2009. ~mrs. c 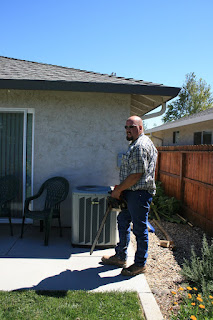