Where has the time, month, and year gone?

Can you believe that October has ended and November is under way? The only good thing about November being underway is that the 2008 Election is finally over! No more television ads, postcards filling my mailbox and recorded telephone messages while we are eating dinner.

And since I am on the subject I might as well get this out of the way. Yes I am disappointed by the results of last nights election. I am scared for our country. More than half of our population has elected a man with less than five years of experience in government! How does that make you qualified to run any country let alone the United States? I guess we will have to just deal with it now and hope for the best. I just feel as though my vote did not count. It really is disappointing that the election was called as soon as the polls closed in California. If this really was an election by the people and for the people, than why don't they count the people's votes and not the electoral college? 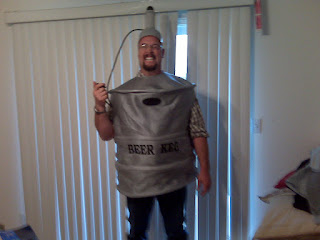 So the weekend started on Friday night of course and that meant candy, costumes, and a Halloween Party! As you can see Jake even got into the spirit and dressed up. I took this picture with the cell phone so its not very good but you get the idea. We had a smaller than normal swarm of candy grabbers rind the doorbell. In all, we went through three large bags of candy - the Costco size! Kids are pretty damn cute but there are a few who I wanted to take their candy away after I had given it to them. Namely the the Jr.High aged kid with a pillowcase for carrying his loot and no costume who cheerfully came to my door and said "trick or treat." After I gave him his candy he turned around to run away and yelled, "No on 8; Go Bama!" You see I had a "Yes on 8" and McCain sign in the front yard. Oddly enough after Jake and I returned from the party the "Yes on 8" sign had vanished. Hopefully by the time he gets the chance to vote, he will have wised up and learned some manners.

As the crowds began to fade, Jake took over at the door so I could put on my costume - Little Red Riding Hood with stilettos! No pictures of me - Sorry! And believe me its probably better this way. We attended the annual Merrill Family Halloween Party that was just around the corner and within walking distance. No need for a designated driver that night - we were hoofin' it! Jake was a party favorite as his costume was functional - yes the tap really worked! We had a great time at the party and managed to be home and in bed before midnight. I guess we are getting old.

Old or not, I had to be up and ready by 6am to head to Rohnert Park for the November California Women for Agriculture (CWA) Statewide Meeting. The trip was wet as the much needed rain was pouring down and the sun was not even close to rising. By the time we slid into the rain soaked Sonoma Valley we had light but no sun.

We started with a meeting to discuss the upcoming budget ( and I started with a bloody marry). And as always the meeting was lively. After all, we are a group of opinionated women with one common goal - ensuring that agriculture is at the forefront of all discussions - legislative, consumer and elementary alike. As with all non-profit organizations, times are tough right now. But we will make it work!

One of the perks of this trip was the chance to attend the Jeff and Lesa Carlton Annual Harvest Party. I was bummed that Jake could not go but I knew he didn't want to spend the rest of the weekend with my CWA sisters. Following the meeting my actual sister Christine Lott (she's a CWA member too), Amy Wolfe, Mandy Critchley, Kara Backman and I loaded up and headed to the party. It was a great time until we had to leave to get back for our Executive Committee meeting. And after a few hours of fun beverages this was even more difficult. But we loaded up and made it to the meeting about 15 minutes late. I am sure our swagger and tardiness to the meeting made it apparent we had a few adult beverages in our system. Not the most professional but we can't be perfect all the time. And besides, the rest of the group had been wine tasting before the meeting.

The meeting ended and like good party-goers we headed back the party. It was almost 10pm and we had been informed by text message that the DJ arrived shortly after our first departure. The night was still young! We arrived to warm wishes from people who had many more drinks than us and had already got their dancing groove on. Sorry there are no pictures of this but if you have access to Leas Carlton's Facebook, you can view her pictures.

Lucky for us we got an extra hour of sleep as the time changed. We held a successful meeting on Sunday morning and headed back to Chico before dark. Along the way, Joan and I stopped at Granzella's in Williams. It was my first visit since they reopened after the fire that destroyed the I-5 landmark. I have to say, the place looked almost exactly the same and the sandwich's were great.

So what did Jake do all weekend? Well he cleaned the house, did the dishes and made a big pot of chicken soup and still had time to relax on the couch with a few movies!

I hope you were laughing when you read that last paragrah because if you know my husband you know the truth. Soup and movies yes, housework no. A girl can dream though...Thanks for visiting. ~mrs. c
Posted by colleen at 12:58 PM