So it has been a while since I have posted anything to our blog. I really don't have any excuses other than a lack of time and maybe a little writers block. But I am here today to share with everyone the first picture of Baby Cecil, due to make his or her arrival on or around January 9, 2010. 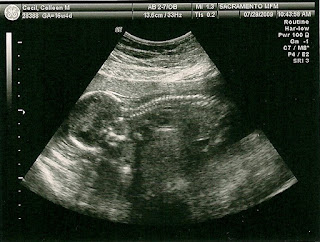 You are probably thinking with all of this great news I would have plenty to write about. However Jake and I agreed that we would avoid blogging and Facebooking about our exciting news until I was through the 1st trimester. Well that time has passed now and today we got this picture.

We hope you will stay tuned for new posts and funny details of our path to parenthood. And for all of you who are wondering - Boy or Girl? You will need to wait and find out when we do in early 2010. With the technology we have you are probably wondering, why not find out the sex?" Well the truth is, this is the only real surprise left in the world and in life. With technology and science, we know pretty much everything before it happens. So while the ultrasound technician may know what the sex of our baby is, we do not. Of course Jake thinks he is an expert at reading ultrasounds because he read about them in a book. We will let him keep believing this. Anyhow, as long as we get a healthy baby - girl or boy - it does not matter because we are going love them no matter what.

Thanks for reading!~mrs. c
Posted by colleen at 2:57 PM 3 comments:

So what’s up with the Cecil’s you ask?

So maybe you weren’t asking yourselves “what’s up with the Cecil’s” but they thought they would tell you anyway. You may or may not recall but a little over a year ago many of you joined Jake and Colleen in Chico for their Wedding Day over the 4th of July holiday in 2008. It was the perfect day and they are so blessed that so many of you were there to share it with them. Thank you again! Well hard to believe but it has been a year already. Where did it go?

Colleen has traditionally written a holiday letter each December but last year she was still recovering from the wedding and to make a long story of excuses short, the holiday letter never got done. Oh well. So Colleen thought, “Why not write a one-year anniversary letter?” Corny maybe, but she has a little more time and energy today than she will come this December. 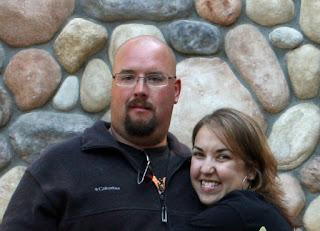 So what have the newlywed’s been doing? After the wedding they went on a much need week-long honeymoon to Cape Mearas, Oregon. They rented a house on the beach and spent the time driving along the Oregon Coast, made an attempt at clamming (this is not as easy as one may think) and eating fresh seafood. It was magnificent. After the honeymoon it was back to reality and that meant WORK just like most other employed tax-paying married couples in our Country. Jake is the Operations Manager for Nicolaus Nut Company in Chico where he oversees the company’s almond and walnut orchards and Colleen is the Executive Director of the Butte County Farm Bureau where she manages the organization’s membership and agricultural advocacy efforts. And to make a little extra cash on the side, Colleen is completing her third year as a Silpada Designs Sterling Silver Jewelry Representative (www.mysilpada.com/colleen.cecil.)

When they are not working they do try and make time for family and friends and of course the much needed get-a-ways to the Peppermill Casino in Reno. It’s the Peppermill’s fault - they keep sending these free room offers and it would be unfortunate if they went to waste! Jake and Colleen have probably only went two or maybe three times over the past year but with Reno only being three hours away, it’s a nice way to escape the everyday drama that is their lives.

Jake did have the opportunity to go to Utah this year with a friend on an Elk hunting trip and Colleen keeps active with California Women for Agriculture (CWA) where she is the Northern District Director for the statewide volunteer group. Jake thinks CWA meetings are just female get-to-together’s and while yes we do the normal girls things (eating, shopping and enjoying great friendships from around the state) we do promote and educate consumers, children and legislators on the importance of California Agriculture.

To celebrate their one-year anniversary Jake and Colleen traveled to Brookings Oregon for a week of NOTHING but relaxing. The weather was cool and foggy, the fresh seafood was yummy and the view from the condo was spectacular. Jake and Colleen figured they better make it a good trip since it is the last one they will take by themselves for a while since they will welcome Baby Cecil in January of 2010. This little bit of exciting news is the other reason for the Summer letter since December will be spent preparing for the new arrival.

Well that is about all for now. You can stay in tune with what’s going on by visiting the Cecil family blog at http://www.jakeandcolleen.blogspot.com/. You can also contact them by email or look us up on Facebook. Even Jake has gotten into the Facebook craze! And if you plan on being in Northern California, please stop by! There is still one spare room now that a Baby Nursery is being decorated!


Love to All~Jake and Colleen
Posted by colleen at 2:00 PM No comments: