Even though he is shy of being one year old by only days, this weekend, my Little Man is relishing in two new milestones. The first and most impactful is the upright and forward facing view he now has in his car seat. Here he is looking comfy, with his cool truck that doubles as a cell phone of course, in his forward facing car seat. Don't tell the car seat police. I know he's not supposed be turned around until he's one and possibly even two but he likes it and its so much easier to get him in the truck now. 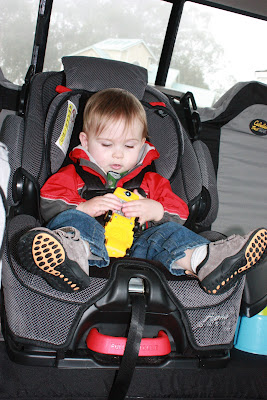 The second milestone is a real pair of big boy shoes (coincidentally also in the picture) that he can walk in. I still think his bare feet are ADORABLE! But he's going to be walking soon and he can't be barefoot forever.

Stay tuned. The BIG birthday party is next. ~mrs. c
Posted by colleen at 5:59 PM