I survived an HSUS seminar!

The title of this post is a bit overly dramatic but its true, I attended an Humane Society of the United States seminar hosted by our local Butte Humane Society early this week. The seminar, titled Advocacy 101, was a really great presentation for anyone who wanted to learn how to reach out to their elected officials and make their case for anything they might be passionate about, like animals.

Let me also say I have nothing against our local BHS, they are a marvelous local resource and I would encourage local residents to support them directly.

However let us not forget the presentation was given by the California State HSUS Director, Jennifer Fearing which means that all of the examples used to describe advocating were in fact about HSUS legislation like California's Prop 2 and SB 135, the tail docking legislation recently passed.

So what was I doing there? Well I wanted to hear about humane animal legislation from the HSUS. I also wanted to make sure that HSUS was not going to come into Butte County and bash animal agriculture. After all, agriculture is Butte County economic foundation.

I was on my best behavior this night and I was also not alone. Sarah DeForest and Megan Brown, local agriculturalists, joined me for the meeting. I would say about 30 people attended. Ms. Fearing opened up the presentation by asking those in attendance what groups were represented. Groups mentioned include the Cat Coalition, Altacal/Audubon, and Top Cat to name a few and then of course us. I did raise my hand to share I was representing Butte County Farm Bureau and California Women for Ag. I am also sure this announcement changed the direction of the responses given by Ms. Fearing. I might also say that the audience on hand was very concerned about domestic animals and not too concerned about farm animals. Still, they are voters and I am glad I was there.

I found it interesting that Ms. Fearing used the tail docking ban as an example of how they worked together with industry; this painted a great picture for the audience whom are probably unaware of HSUS tactics. I was not there to upset the apple cart so I did not bring to the attention of the group that the bill was directed at the dairy industry and if I am correct, less than 2% of the industry was even using this method before the legislation passed. So what might have been perceived by the audience as being a significant victory was in fact, not a significant devastation to agriculture.

Furthermore their Prop 2 Victory makes to further justify their strategy of relying on the media to drive their message. They spent $10 million on Prop 2 and got 8.2 million votes. She also bragged that many large Ag counties voted yes on Prop 2. Ms. Fearing further defined theses counties being Kern County south. No offense to the counties in Southern California but not what I would define significant Ag counties. Again, it’s all about how you tell the story.

A couple other interesting points. Moving forward she suggested that Brown’s administration will probably focus on the budget to keep his voter promise and avoid legislation that does not have much to do with reform in Sacramento. One might take this to suggest they are going to back off in 2011 and build their war chest? Probably not but it was my observation and I thought worth mentioning.

Oh! The best part. I answered a question correclty and won a prize. While I have kept this momento, an "I Support Humane Legislation" button, I will not be sharing a photograph of it. Sorry. If you're ever in my office, ask to see it. I put it right next to the letter mailed to my office calling me a "twit." I'll save that story for another post.

Who knew after all of those years of growing up on a dairy I would in fact grow up and marry a farmer just like my dad and my grandfathers. But Jake is not a dairy farmer -he's a walnut farmer!! And yes, there are always walnuts in the house. Thank goodness for all of those California Walnuts because I am a big fan of these Sugared Walnuts.

My grandmother and my mom have been making Sugared Walnuts at Christmas for as long as I can remember. Now that I am a mom and planning my own Christmas celebrations, I have of course made sure this treasured recipe is part of my collection. 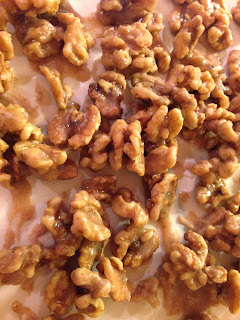 And now I am going to share it with all of you.

In saucepan mix sugar, salt, cinnamon and milk. Cook without stirring over med heat till mixture reaches 240° (soft ball). Remove from heat. Quickly add vanilla and walnuts and stir until nuts are coated and mixture begins to get sticky. Spread nuts into single layer, using a fork to separate, onto wax or parchment paper. Allow nuts to cool. Store in air tight container.

Not sure how long they will stay fresh because they are always eaten to fast to get stale!

I guess I was destined to always have walnuts in my life. Merry Christmas from our family to yours! ~mrs. c
Posted by colleen at 2:37 PM No comments: