By now you have probably read the Yahoo article from Janaury 19 (found here) that said that three of the five most "useless" degrees all have something to do with agriculture. This afternoon, California State University, Chico College of Agriculture Dean Jennifer Ryder-Fox realeased the following rebuttal to the Yahoo article and I wanted to share it with you today on my blog. Thanks Jennifer and CSU Chico for all you do and for standing up for higher education in agriculture. Fell free to pass this on to others. Thanks for reading, Colleen

"Useless" or Essential? Why Our Agriculture Majors Are Growing
By Jennifer Ryder Fox
After reading the January 19, 2012 Yahoo Education article "College Majors That Are Useless," one might be led to believe that the author, Terence Loose, has something against eating, wearing clothes, enjoying a natural landscape, or smelling a bouquet of roses. What other reason could he have for singling out Agriculture, Animal Science, and Horticulture as three of the five most useless degrees? Mr. Loose’s rationale and indeed the original ranking mentioned in the article are certainly not based on fact.

In contrast to the Yahoo article, a Purdue University study funded by the USDA projected an estimated 54,400 annual openings for college graduates in food, renewable energy, and the environment between 2010 and 2015. The study projected only 53,500 qualified graduates will be available each year and stated that employers have expressed a preference for graduates from colleges of agriculture and life sciences that tend to have more relevant work experience and greater affinity for those careers.

Further demonstrating the need for educated agriculturalists, the November 2009 Monthly Labor Review projected particularly strong (double-digit) growth in certain agricultural careers such as agricultural inspectors, animal scientists, food scientists and technologists, natural sciences managers, pest control workers, soil and plant scientists, and veterinarians. A mere two weeks ago, the Washington Post printed the results of a Georgetown University study showing that recent college graduates with degrees in agriculture and natural resources were among those with the lowest unemployment rates in the nation at 7 percent, surpassed only by graduates with degrees in health (5.4 percent) and education (5.4 percent).

Across the country state support of public universities is dwindling, and the consequence of budgetary decreases is seen with some universities making choices about programs to reduce or eliminate. In a few states, agricultural programs have been targeted for reduction or even elimination. State supported universities in California have also been affected by reduced state budgets, but there’s no talk of eliminating any of the universities’ agricultural programs, as agriculture is the top economic driver in California and generates over $33 billion in revenue for the state while producing over 350 products. Rather, the effect of reduced state support has been to tighten our belts and look to external grants and contracts and other funding sources so that we can serve our increasing number of students.

The California Community College Centers for Excellence recently completed an environmental scan of the agriculture value chain in California and found that there are currently 2.5 million individuals employed in more than 800 job titles within the agriculture value chain in the state. The average annual salary for agricultural value chain workers is $50,000. While the number of production jobs is expected to decrease in the next five years, a net increase of 181,000 jobs is expected throughout the entire agricultural value chain, which includes support, research, technology, production, processing/packaging, marketing, and sales and distribution. No one disputes that with advanced technology and mechanization, skilled production jobs in agriculture (or any field for that matter) have decreased and will most likely continue to give way to mechanization.

Here at CSU, Chico, the optimism for agricultural careers can be seen in the 50 percent enrollment growth in programs offered through the College of Agriculture during the past five years. And across the country, agriculture programs are seeing a surge in student interest. Clearly, our students and those in other ag programs are seeing the tremendous career opportunities available in agriculture and are jumping at the opportunity to pursue them, Mr. Loose’s puzzling attack on their choice of major notwithstanding.


Jennifer Ryder Fox is the dean of the College of Agriculture at California State University, Chico. She can be reached here.
Posted by colleen at 3:35 PM 1 comment:

I try to avoid posting pictures of myself on this blog unless they are really good (professional) or really old because I was cute as a kid. However, since we announced that we were expecting Baby Boy Cecil in March 2012, I have yet to post a baby bump picture. Let's be honest, it was not much of a bump until recently. Before that I was the girl they were whispering about who just gained an extra 20 lbs.

Well let me first say that you were wrong - according the scale at the last Dr. appointment I had only gained 10 lbs. Sure I probably had a few extra hanging around before the baby but those are my fault and I am okay with that. So why the sudden urge to share? Well I was unable to attend the California Women for Agriculture Annual Convention last week and my dear friend from North Dakota, Katie Pinke of the Pinke Post asked for a baby bump picture since she could not see me in person. So Katie this one is for you!

All is well in pregnancy land. Baby is kicking ferociously all of the time but Clayton did the same so while it still amazes me I know I should not be shocked. And yes we are making the necessary preparations to expand our household from three to four. Jake is taping off the spare room for its new coat of paint and its transformation in the nursery. 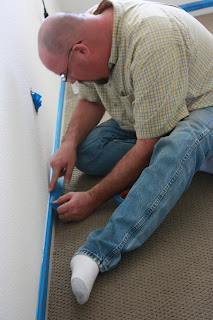 Clayton is very helpful as you can see. He was holding the tape for Dad. However when dad needed it, Clayton was usually down the hall or across the room. But he's so cute it really is hard to get mad at him. Next up will be paint and then moving the baby furniture. Clayton got a new big boy bed this week that we will set up this weekend and begin the transition from crib to bed. If any moms are reading this and have advice for transitioning from crib to bed, I am listening. Please feel free to share. 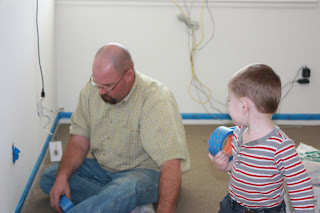 All in all we are very excited for our new little guy to make his appearance sometime in late March. Stayed tuned for more details! Thanks for reading. ~mrs. c
Posted by colleen at 3:45 PM 7 comments: